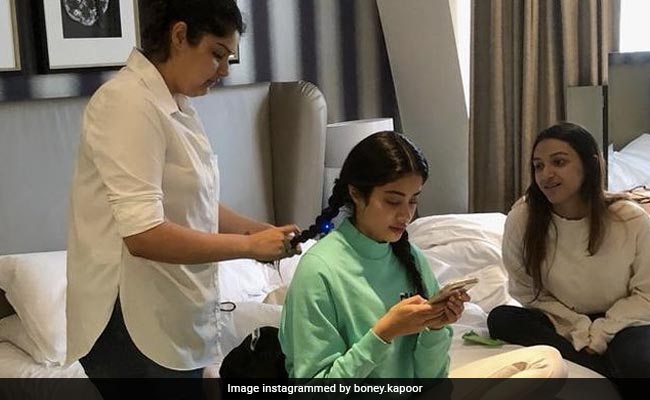 Janhvi Kapoor knows how to keep her fans hooked with quirky posts, travel diaries and fashion statements. But she also keeps us entertained with sneak peeks into her life. This time, Janhvi has teamed up with Anshula Kapoor to give us major sister goals. A candid photo on social media shows the siblings spending some quality time together. However, what’s more interesting is that they were caught on camera by none other than their dad Boney Kapoor. The Bollywood film producer posted a photo on Instagram where Anshula is seen tying Janhvi’s hair into braids. Meanwhile, Janhvi quietly sits and stares at her phone. Posting this photo, Boney Kapoor wrote, “Love this picture.”

On Anshula’s birthday in December, Boney Kapoor remembered to give her a shoutout on social media. He posted an adorable photo with his daughter and wrote, “Happy birthday my wonder child, my pretty baby my genius bachha.” To this, Anshula replied, “Love you, dad.”

Earlier, Boney Kapoor posted a photo with his children: Arjun Kapoor, Janhvi Kapoor, Anshula Kapoor and Khushi Kapoor. He captioned it, “My wealth” and added a string of red hearts.

We often get to see glimpses of Boney Kapoor’s adorable bond with his children. When Janhvi Kapoor wrapped her new film Milli, she wrote a heartwarming note for dad Boney Kapoor, who is also the producer of the movie. She wrote, “It’s a wrap. Milli – My first film with papa, of whom I’ve only heard stories of all my life as a producer. But after working with you, it feels so cool to say that. I finally know what everyone means when they say you give your heart and soul to each film you take up.”

Janhvi Kapoor is the daughter of Boney Kapoor and late actress, Sridevi. She made her Bollywood debut in Dhadak opposite Ishaan Khatter. She was also part of Ghost Stories and Gunjan Saxena: The Kargil Girl. She was last seen in the film Roohi.