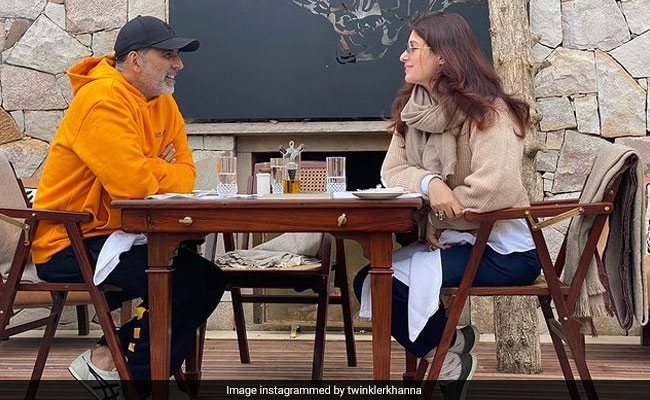 Akshay Kumar and Twinkle Khanna are here to give us major couple goals on their 21st anniversary. The Bollywood power couple has stayed strong over two decades of togetherness. This year, they celebrated the day with a trip to Ranthambore’s Sher Bagh. The two have shared videos and photos from their anniversary getaway. And, we can’t stop talking about them. The couple got a glimpse of a tigress moving in the wilderness during their jungle safari. Akshay Kumar posted its video on Instagram and wrote, “Sone pe suhaga manga tha, yeh toh uss se bhi badkar ho gaya [I had wished for good luck but this is even better than that]. Absolutely fascinated to see this majestic beauty today. Mission Ranthambore accomplished. Copy that.”

Twinkle Khanna has also uploaded a collection of photos and videos from Ranthambore. The first slide featured a video of the tigress that they witnessed. The next slides contained photos of a desk with a typewriter and a library full of books. There was also a video where Twinkle Khanna and Akshay Kumar’s daughter, Nitara, is holding the book The Legend of Lakshmi Prasad by Twinkle Khanna. The caption read, “We spotted a magnificent tigress on the prowl, my book in their library and the right spot to chill. The perfect anniversary getaway at Ranthambhore’s Sher Bagh.”

While the couple’s Ranthambore diaries got us excited, their mushy wishes to each other sent our hearts melting. Akshay Kumar posted an old photo with Twinkle Khanna and wrote, “Twenty-one years since we’ve been married and yet it feels like I am just getting to know her. Thank you for making each day feel like the first. Happy Anniversary, Tina.” Twinkle Khanna couldn’t help but drop a red heart emoji on her husband’s post.

Twinkle Khanna dropped an adorable picture featuring the two and wrote a humorous caption, “On our 21st anniversary, we have a chat. Me: You know, we are so different that if we met at a party today, I don’t know if I would even talk to you. Him: I would definitely talk to you. Me: Why am I not surprised. So like what? You would ask me out? Him: No, I would say, “Bhabhi ji, how is Bhai Sahab, kids fine? Ok, Namaste.””