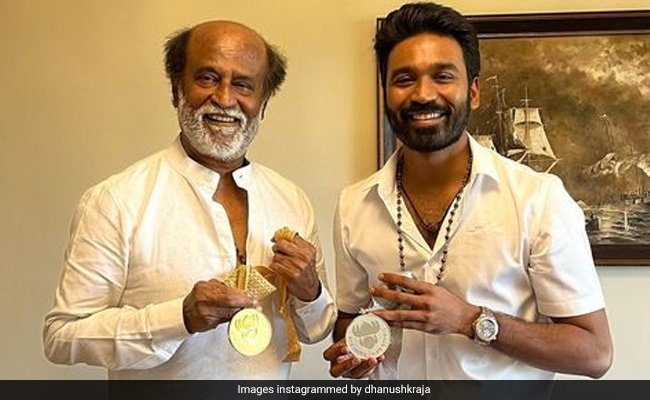 A throwback of Rajinikanth with Dhanush. (courtesy: dhanushkraja)

Just a few days after Dhanush and filmmaker Aishwaryaa announced separation, a throwback video of Aishwaryaa’s father and superstar Rajinikanth went viral. The video, shared by several fan pages features Rajinikanth praising Dhanush at an event. “Dhanush is a wonderful boy. He respects his parents, considers them God. He takes care of his wife. He is a good father, a good son-in-law, a good man, a good talent,” Rajinikanth can be heard saying in the video.

This is the video are talking about:

During a chat with Karan Johar on Koffee Shots With Karan, Dhanush was asked what would he do if he woke up one morning as Rajinikanth. Dhanush’s reply was: “Stay as Rajini sir.”

At the 67th National Film Awards, Rajinikanth received the Dadasaheb Phalke Award – India’s highest film honour – for his stupendous contribution to Indian cinema, while Dhanush won the Best Actor Award for his performance in Asuran. After receiving the award, Dhanush shared a photo of himself with Rajinikanth and he wrote: “To win a National Award for best actor on the same stage where my Thalaivar was winning the prestigious Dada Saheb Phalke award was just indescribable.” He added, “Thank you to the National award jury for bestowing me with this honour. Also thank you to the press and media for your constant support.”

On Monday night, Dhanush and Aishwaryaa announced their separation with a statement that read,”18 years of togetherness as friends, couple, as parents and well-wishers to each other… The journey has been of growth, understanding, adjusting and adapting. Today we stand at a place where our paths separate… Aishwaryaa and I have decided to part ways as a couple and take time to understand us as individuals for the better. Please do respect our decision and give us the needed privacy to deal with it.”