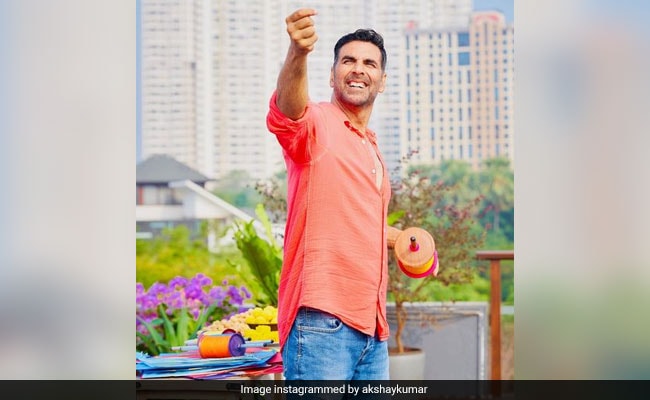 On the occasion of Sankranti, social media is understandably flooded with pictures and videos related to the festival. Now, Akshay Kumar has dropped a photo of himself flying a kite to wish his fans on the occasion. The superstar also penned a special note for his social media followers. In the caption, Akshay Kumar wrote, “Meethe gud mein mil gae til…udee patang aur khil gae dil (Sesame seeds found in sweet jaggery…The kite has flown and the heart blossomed).” The actor further added, “May Makar Sankranti bring new hope and joy in your lives. Bas vishwas ki dor pakad ke rakhna (Just hold on to the string of faith).”

Akshay Kumar made headlines recently when he announced his new film Selfiee. The actor made the announcement with a fun video in which he is seen dressed in a suit and dancing in what appears to be a bus station. Along with him in the video is actor Emraan Hashmi, who also stars in the film. Sharing the video, Akshay Kumar wrote, “Presenting Selfiee, a journey that will drive you towards loads of entertainment, laughter and emotions. Shooting begins soon!” Also tagged in the post was Raj Mehta, who is directing the film.

The film is being produced by Karan Johar’s Dharma productions in addition to  Magic Frames and Cape Of Good Films. Also serving as a producer is Malayalam actor Prithviraj Sukumaran, under his banner of Prithviraj Productions.

When the actor is not updating us on his work, he offers us a peek into his personal life. Not so long ago, Akshay Kumar shared a video in which he is being showered with love and some sloppy licks by his pet dog. Sharing the video, the actor said, “ Lakhon mile, koi bhi na tumsa mila…A million love songs can’t match this unconditional affection. Pets are pure.”

In addition to Selfiee, Akshay Kumar will also be seen in Prithiviraj, Bachchan Pandey, Raksha Bandhan, Ram Setu and OMG 2 – Oh My God 2.