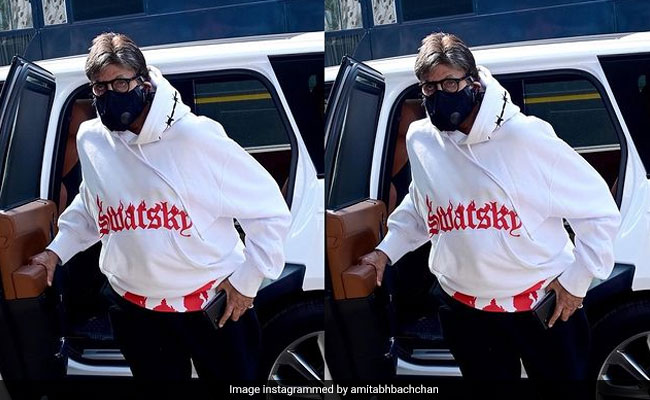 Amitabh Bachchan is excited to be back at work. While the rise in COVID-19 cases led to some shoots being stalled — as the superstar revealed in a recent social media post — it seems like people are now getting back to work. And, to mark the happy moment of him returning to sets, Amitabh Bachchan shared an image of himself getting out of his car, presumably heading to a shoot. Dressed in a sweatshirt and pants, the veteran actor looks suave as always in the image. In the caption, he said, “Okay… back to work,” while adding that all protocols in light of the pandemic are in place. He continued, “Masked sanitized distance-sized vacinized .. and every other IZED.”

Replying to the post, Amitabh Bachchan’s granddaughter, entrepreneur Navya Naveli Nanda said, “Can I have this hoodie?” with smiling emojis.

The hoodie also found another fan in actor Rohit Bose Roy who said, “Loveeeeee the hoodie! Too much OG swag in the pic.”

See the image there:

A few days ago, Amitabh Bachchan shared a selfie informing his fans that most of the work has been put on hold in light of the pandemic. Sharing a photo, the superstar said, “Kaam vaam sab band hai …bas daadi badhati ja rahee hai (All work has come to a standstill, only the bread seems to be growing).”

That’s not all. A few days ago, Amitabh Bachchan shared a photo of himself – more specifically, his lanky legs – as he basked in some sunshine in his home garden. Along with the picture, the icon said, “Clear blue skies .. bright sunshine .. cool breezes… ye hai Mumbai meri jaan (This is Mumbai, my dear).” Replying to the post, actor Angad Bedi, who featured with Amitabh Bachchan in the film Pink said, “So lovely.”

The actor also gave us a peek at how he welcomed the New Year. Amitabh Bachchan shared a selfie in which he is seen with his headphones on and eyes shut. He kept the caption simple with just the date.

On the work front, Amitabh Bachchan will be seen in a host of new films including Brahmāstra, Runway 34, Good Bye, Uunchai and an untitled film directed by Nag Ashwin, among others.