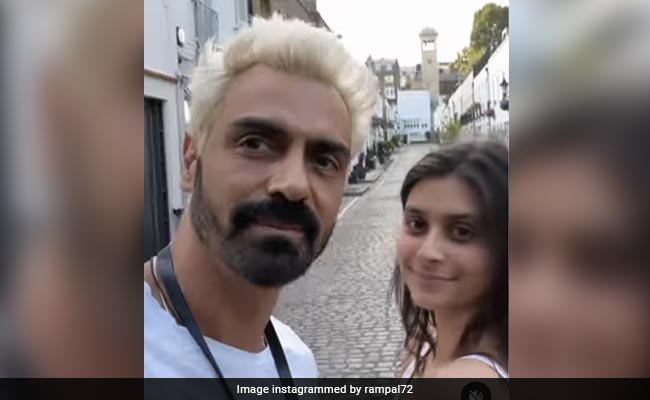 Arjun Rampal’s Instagram timeline is dominated by posts about his children and this Monday was no different. The actor shared a lovely post on a very special occasion – his daughter Mahikaa’s 20th birthday. Sharing a montage video that features treasured moments of the father-daughter duo over the last two decades, the star also penned a sweet caption. In it, Arjun Rampal wrote, “And just like that she’s 20. My little princess, you will and shall always be just that to me. You have grown up so beautifully and now with this new decade that you step into, only abundance of joy and happiness awaits you.”

Arjun Rampal further added, “Love you to smithereens my Mahu jaan. The force is with you. Thank you for just being you. Happy 20th.” The Beatles song Here Comes The Sun also plays in the background.

Arjun Rampal’s girlfriend Gabriella Demetriades replied with heart-eye emojis. Mahikaa is Arjun’s elder daughter with his first wife, Mehr Jesia. They also have another daughter, Myra. The couple split in 2019. Arjun Rampal and Gabriella have a son named Arik who is seen in the birthday video.

Replying to the post, director Abhishek Kapoor said, “Happy birthday Mahikaa Rampal. Have a fantastic year ahead. and wish u loads of joy success in ur endeavours ahead.”

Last week, Arjun Rampal revealed in a post that Mahikaa has tested positive for COVID-19. The proud father said in a post that during quarantine, Mahikaa had used the time to learn to play a song on the piano. Sharing a video of Mahikaa playing the piano, he wrote, “A work in progress. My darling Mahu who tested positive for Covid, spends some of her quarantined time, self-teaching herself to play Shallow. From A Star is born. This is day 2 of that practice. Sorry for the long explanation. But just a proud Dad I guess.”

Before that, Arjun Rampal even shared a picture of himself with Gabriella Demetriades, Mahikaa, Myra and Arik having a great Sunday. In the caption, he wrote, “Good morning, kayaking a good way to start a Sunday.”

On the work front, Arjun Rampal was last seen in the web series Nail Polish. His film, The Rapist, written and directed by Aparna Sen premiered at 26th Busan International Film Festival under the ‘A Window on Asian Cinema’ section.