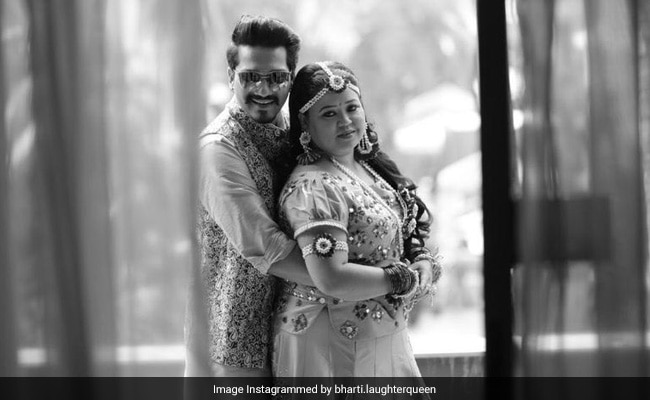 Bharti Singh is one of the most famous comediennes in India. From being a part of the show to now hosting several reality shows, Bharti has come a long way when it comes to her professional side. On the personal front, Bharti Singh is married to writer Haarsh Limbachiyaa. The two got married in 2017 in Goa and are now expecting their first child. While Bharti is from a Punjabi family, Haarsh Limbachiyaa hails from a Gujarati family. Recently, Bharti Singh revealed how she adjusted to a Gujarati family after marriage. In the interview, Bharti Singh also shared how she bonds with her father-in-law.

Popular twin sisters of the TV industry Surabhi Samriddhi aka Chinki Minki interacted with Bharti Singh for a fun segment for their YouTube channel. Bharti Singh shared a video from a segment, in which, Surabhi-Samriddhi asked her if she has ever been interviewed by two people at once. Bharti gave a funny expression and said her “saas-sasur” (mother-in-law and father-in-law) interviewed her.

During the interview, Surabhi Samriddhi also asked Bharti Singh to reveal the most expensive and least expensive gifts that she received at her wedding. “Ice cream ke 6 katoriyan kaun deta hai Goa aake, isse accha tum mujhe ‘pan’ khila dete,” replied Bharti. (Who comes to Goa and gives 6 bowls of ice cream. Better you would have fed me with pan)

Bharti Singh is expecting her first child with Haarsh Limbachiyaa and the baby is due in April 2022. The comedienne is working non-stop and wants to work till she delivers her child. At present, Bharti and Haarsh are co-hosting the reality show Hunarbaaz.