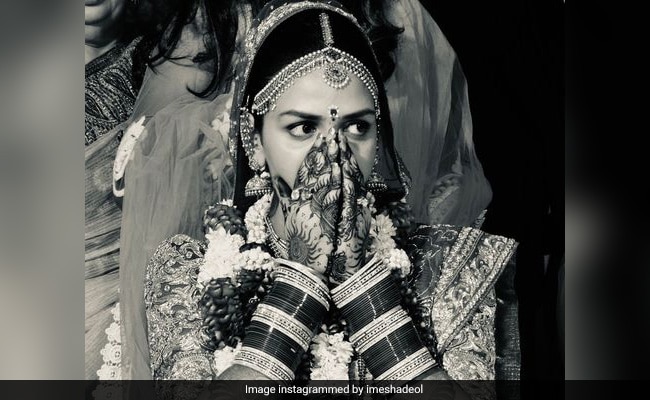 There are several moments in life when one realizes that things are never going to be the same again and a wedding is definitely one of those milestones. And wedding pictures often convey this happy realization dawning on the faces of the couple. One such picture was shared on social media by actress Esha Deol Takhtani straight from her wedding album. In the image, the actress is seen in her wedding ensemble, with her hands covering her mouth, almost in awe of what was happening around her. Further, the star gave us a peek at her state of mind at the time in her trademark hilarious style. In the caption, she explained the moment as a transition from being a “biker chick to bahu”.

In the caption, Esha Deol wrote, “OMG! I’m a “bahu” now. P.S: That expression – when you go from biker chick to bahu!” Along with the hashtag “Throwback Thursday”, she wrote, “Throwback to me being just married.” She also added another tag, “Indian bahu”.

Replying to the post, actress Smriti Khanna said, “Omg what a pretty bahu,” with a heart-eye emoji.

Esha Deol often shares pictures and videos of her personal life on social media for her fans to see. Recently on the occasion of Pongal, the actress shared a video of her making the customary Pongal dish. In the caption, she wrote, “As the country celebrates the harvest festivals of Sankranti, Pongal, Bihu, and Uttarayan. I always make Pongal at home for my family (a tradition I learnt from my grandmother) sweet Pongal is a favourite with my kids and we all love screaming together “pongalo pongal” as it’s being cooked. Sending warm wishes to you and your loved ones. Stay blessed.”

Before that Esha Deol spread positive vibes on Instagram by sharing a montage video of herself enjoying the sunset over the course of several days. “Sunny side up! Aren’t sunsets magical? You can never get enough of them,” she wrote in the caption.

Esha Deol also welcomed 2022 with a wide grin and a glamorous photo. In it, she is seen tearing and stepping out of a poster. Her caption said, “Hello 2022. Let’s continue to look at the brighter side, let’s be one, let’s only give love and respect, let’s look after ourselves and our loved ones and continue to live a healthy lifestyle.”

Esha Deol is the daughter of veteran actors Dharmendra and Hema Malini. She has been married to Bharat Takhtani since 2012. Esha Deol made her acting debut in 2002 with Koi Mere Dil Se Poochhe.