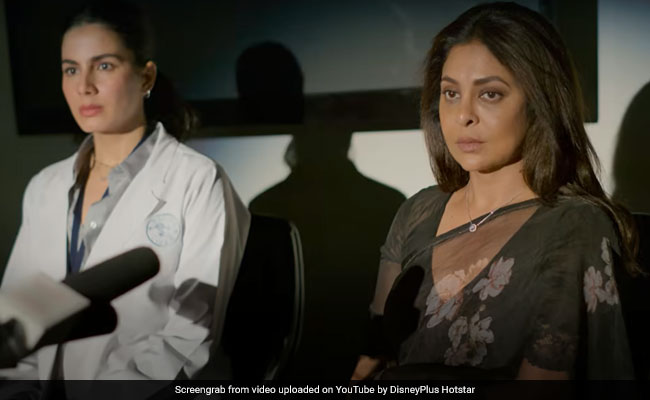 Set in Bhopal, once a princely state where power was wielded by a succession of Begums, Human, is a deeply engrossing and thrilling medico-social series in which two women stand front and centre. This pair of strong, complex, difficult-to-decipher characters want to rule like the Begums of Bhopal.

That, of course, is easier said than done, but Shefali Shah and Kirti Kulhari, with sharp, vibrant and layered performances as women who will stop at nothing to get their way, stamp their presence on the show in no uncertain terms. The former is absolutely brilliant in the role of an unabashed self-seeker in a do-gooder’s clothing. And it is a treat to watch the Kulhari match Shefali Shah step for step.

Created by Vipul Amrutlal Shah and Mozez Singh (who take turns to direct the ten episodes of the show) and streaming on Disney+Hotstar, Human spins a riveting story around illegal, unregulated human trials of a banned drug and the repercussions of the medical scam – the death of innocents and murders most foul in addition to brazen cover-ups, inducements, threats and secret deals. As pharma companies and medical facilities play fast and loose with regulatory mechanisms in the pursuit of profit, the lives of poor, illiterate volunteers are put at risk. All this in a city that is still reeling from the after-effects of the 1984 Union Carbide gas leak.

The location of the story coupled with the world’s current struggle with a vicious virus give Human added relevance and heighten the force of its central narrative pivot – hapless humans at the mercy of those that possess the power to get away with utter disregard for lives.

Behind the medical malpractices is a floundering pharma firm desperate to push ahead with a wonder ‘cure’ for heart patients to shore up its bottomline, which has been adversely affected by its failure to wrest a Coronavirus vaccine contract.

“There are some rules you never break,” says the patriarch (Mohan Agashe) who owns Vayu Pharma, when his son (Aditya Shrivastava), who is now in the saddle, announces his decision to skip an entire stage in the testing process and go from conducting animal trials to undertaking Phase 2 human trials.

But the words of caution from the old man are no more than just that – words – and the firm and its co-conspirators break the rules with impunity in collusion with politicians, medical professionals and drug regulators.

The principal site of the drama, written by Mozez Singh and Ishani Banerjee, is a super-specialty hospital run with an iron hand by a plain-speaking woman who, as the show kicks off, hires a younger female doctor and puts in motion a plan to cut her principal cardiac surgeon (Atul Kumar) down to size. While the duo’s stratagem looks pretty straightforward at first flush, nothing about the two women is ever as obvious and as simple as it seems.

Dr Gauri Nath (Shefali Shah), a hotshot neurosurgeon, and Dr Saira Sabharwal (Kirit Kulhari), a cardiac surgeon with a rapidly growing reputation, are in near-absolute control in their hospital notwithstanding the daily challenges they encounter in the line of duty, but their lives outside the workplace tell a different tale. They are women who have much going on beyond the pale of their impressive professional profiles.

They are at a loss for answers to the questions that swirl around them at home. They are both flawed and given to resorting to means of self-preservation that frequently cross the lines of acceptable behaviour.

Gauri and Saira are the kind of women we rarely see on our screens, big or small. They are bound by vaulting ambition and fierce determination. There methods are raw, relentless, even corrosive, as they fight to hold their ground in a world where not giving a quarter is their biggest and most reliable defence mechanism. They seek both power and perfection.

Determined not to yield any ground to family members, friends or foes, the mentor and her protegee play mind games that are fraught with risk. “The brain is the most fascinating organ of the human body,” Gauri says to Saira, quickly claiming that “I can read minds.” But can she?

The drama of Gauri and Saira’s lives, which form the spine of Human, is centred on their desire to earn acceptance and fulfilment and assert their authority, neither of which is theirs for the asking. Their progress in a man’s world depends on not shying away from the politicking that is rife in the boardroom and the operation theatre, and on giving as good as they get.

Human has a multiplicity of characters. It takes two episodes to complete the full exposition of key plot details and character motivations. It gathers momentum Episode 3 onwards and sustains a dizzying pace all the way till the end.

Gauri, who takes pride in the fact that she is carrying forward the legacy of several generations of doctors, and Saira, daughter of a retired compounder, have secrets that define who they are. They conceal past wounds that lie at the root of their complicated relationships with their spouses and other relatives.

Gauri and Saira have unresolved issues between themselves and their husbands (played by Ram Kapoor and Indraneil Sengupta respectively) and as the story unfolds the misunderstandings multiply. Pyaar hamesha dard deta hai (Love always inflicts pain), laments a character. But then, there is little love lost between these two women and their married partners. The pain they feel stems from the absence of love and from grief and misgivings Human has several other intertwining narrative tracks that impact the moves that Gauri and Saira make. A young man Mangu (Vishal Jethwa, who delivers the goods) and his autorickshaw driver-father (Sushil Pandey), part of an impoverished migrant family of four still unsettled by the lockdown, fall into the clutches of ruthless, unscrupulous men and women running the drug trial racket.

Keenly aware of their precarious existence, Mangu’s marginalized family knows that “hum jaise logon ke liye insaaf nahi hota, sirf sazaa hoti hai (for people like us there is no justice, only punishment). Their zeal -and instinct – for survival keeps them going in the face of ever-increasing odds.

The plight of a group of girls held in a shady medical laboratory where a nefarious ‘neurological experiment’ is underway is no different. A mysterious head nurse, Roma (Seema Biswas), controls the fate of these girls rescued from prostitution and other forms of exploitation and pushed into an infinitely darker hell-hole. As things begin to spin out of control, the girls are treated worse than lab rats. A social activist Omar Pervez (Aasif Khan) stumbles upon the shocking truth of manipulated drug trials and the deaths and side-effects connected with them while working among victims of the industrial gas leak of nearly four decades ago.

The Shefali Shah-Kirti Kulhari duet is the pounding heart and the pulsing veins of Human, an absorbing drama with a full, flawless complement of twists and turns that retain the power to spring surprises right till the bitter end. Human is, in one word, spellbinding.