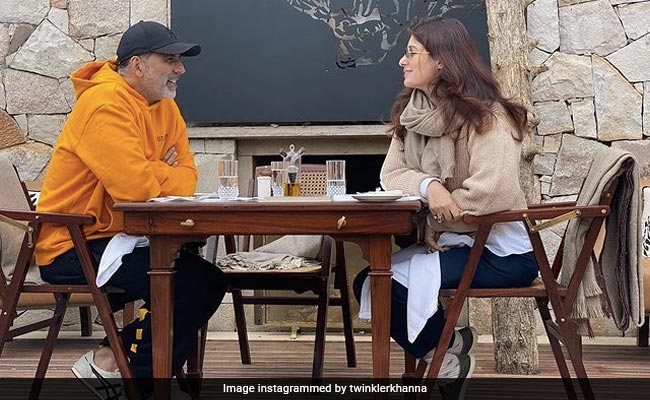 So Akshay Kumar and Twinkle Khanna are celebrating their 21st wedding anniversary today. On the special occasion, Mrs Funnybones shared a picture-perfect moment with her husband and she added a humour-infused caption along with it. The author wrote in her caption that if they “met at a party today,” this is how their conversation would go. She wrote: “On our 21st anniversary, we have a chat. Me: You know, we are so different that if we met at a party today, I don’t know if I would even talk to you. Him: I would definitely talk to you. Me: Why am I not surprised. So like what? You would ask me out? Him: No, I would say, ‘Bhabhi ji, how is Bhai Sahab, kids fine? Ok Namaste.'” She added the hashtag #21yearsoflaughter.

Twinkle Khanna has authored three best-selling books. Her first book Mrs Funnybones was a compilation of her columns. Her second book – The Legend Of Lakshmi Prasad was an anthology of short stories, while her third book Pyjamas Are Forgiving was a novel.

Other than being a renowned author, Twinkle Khanna is a celebrated columnist, a former actress, an interior decorator and a film producer. She runs a studio named The White Window (which operates in Mumbai). She also runs a digital content company called Tweak India.