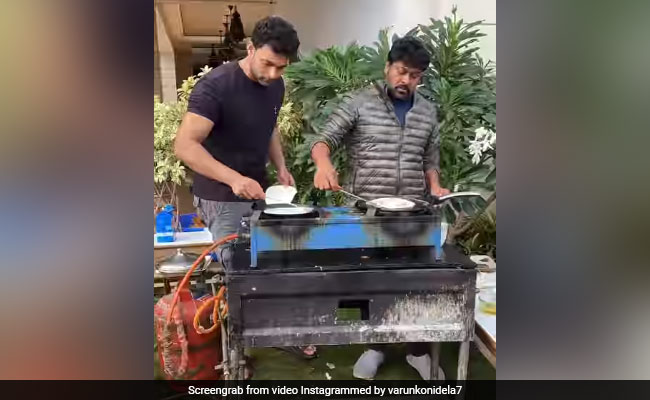 Varun Tej and Chiranjeevi in a still from the video. (courtesy: varunkonidela)

Superstar Chiranjeevi spent Sankranti in the company of his extended family. Chiranjeevi, brother Naga Babu and brother-in-law producer Allu Aravind gathered with their families under one roof to celebrate. The actor, on Friday, shared a video on social media wishing his fans and followers. Additionally, he also took fans into the celebration by giving us a glimpse of the get-together, which features several members of the Mega family, as they are known. The video begins with Chiranjeevi saying, “Andariki Bhogi Sankranti subhakankshalu (Wish everyone a happy Bhogi and Sankranti). Love you all,” before he pans the camera to show the rest of the family in attendance.

The first to appear in the video is actor Varun Tej who wished all the fans. Soon Allu Aravind, Ram Charan  and his wife Upasana Kamineni, Sai Dharam Tej and Niharika Konidela also appear in the video to wish the fans. As the family gathered around a bonfire, everyone seemed to be in high spirits as they laughed, hugged and indulged in banter.

Niharika Konidela gave us some more glimpses of the family having a gala time on the festive occasion. The family is seen making dosas, chatting and sitting around the bonfire. Sharing the video, Niharika wrote, “Happy Bhogi! This year, Dosas > Bonfire!”

Varun Tej too shared a lovely video that begins with him lighting a bonfire. He then proceeds to make dosas with Chiranjeevi, engaging in a cooking contest of sorts. In the video, Chiranjeevi is seen hilariously trying to destroy Varun Tej’s dosa as it looks better than his. Upon scrambling it, the veteran actor gleefully calls it an “upma” as Varun Teja looks perplexed. Soon, Vaishnav Tej and Sai Dharam Tej are seen lining up to taste the yummy dosas.

The New Year has begun on a great note for the Mega family after Allu Arjun, son of Allu Aravind, tasted tremendous success with his film Pushpa. Next on the list is Ram Charan’s much-awaited filmRRR, which was scheduled to release on January 7 but was postponed due to the spike in COVID-19 cases.