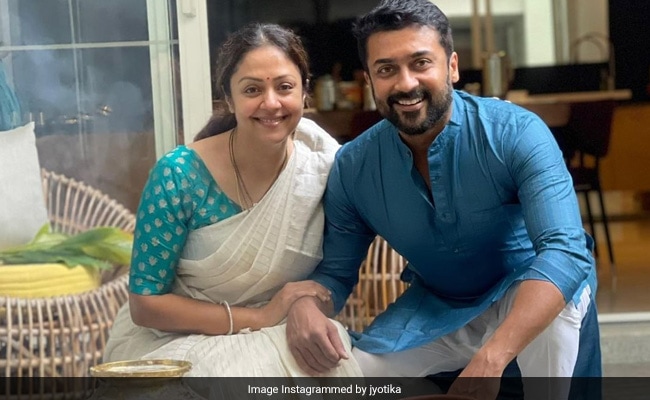 Jyotika, who made her Instagram debut last year, loves to share posts from different facets of her life. The actress, on Friday, shared Pongal greetings for her Instafam. The picture also features her husband and superstar Suriya. In the picture, the star couple can be seen smiling with all their hearts as they pose together. Jyotika can be seen dressed in a white saree, while Suriya can be seen wearing a blue kurta. The actress captioned her post: “Happy Pongal , Happy Sankranthi and Happy Lohri to all.”

See the picture shared by Jyotika on Instagram here:

Suriya and Jyotika, co-stars of films like Poovellam Kettuppar, Uyirile Kalanthathu, Kaakha Kaakha, Perazhagan, Maayavi, June R and Sillunu Oru Kaadhal, got married in the year 2006. They are parents to a daughter named Diya and son Dev.

In terms of work, the actor was last seen in the film Jai Bhimwhich released last year. He was also seen in Netflix’s Navarasa, which was backed by Mani Ratnam. He has also signed an untitled film with director Siruthai Siva. Suriya, who made his debut in 1997 with Nerukku Ner, is best known for his work in the hit Singam series of films, Kaakha Kaakha Vaaranam Aayiram, Nandha, Ghajini, 24 among many others