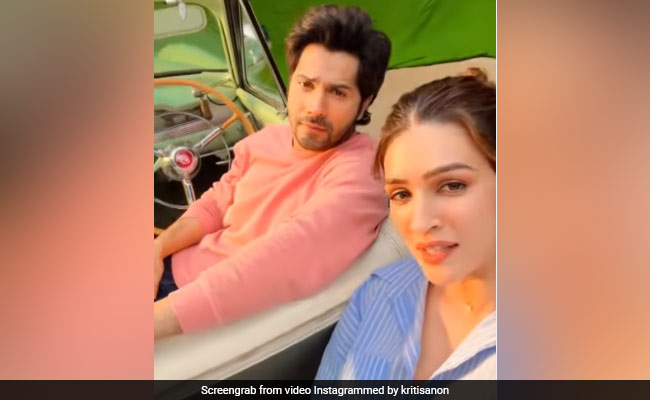 Varun and Kriti in the video. (courtesy: kritisanon)

When Varun Dhawan and Kriti Sanon get together you can bet there is going to be a whole lot of fun. And this is exactly what happened on the sets of an advertisement that the two actors were shooting for recently. In a video shared on Instagram, Kriti Sanon can be seen saying, “Varun, I think it is going to be a full moon tonight.” In response, Varun Dhawan imitates the howl of a wolf. For the unversed, the conversation between the two is related to the actors’ upcoming film,Bhediya, in which Varun is reportedly playing a werewolf.

Sharing the video, Kriti Sanon said, “Just Wolfing around on an ad shoot!” tagging Varun Dhawan. Varun Dhawan too shared the same post on his timeline.

Varun Dhawan shared the first look of the film on Instagram in November, last year. The poster shows the actor looking fierce with his eyes shining bright in the dark. The poster also features an eerie jungle in the background. Sharing his first look from the film, Varun Dhawan wrote: “Bhediya #bheidyafirstlook. In cinemas November 25th, 2022.”

Earlier in July 2021, Varun Dhawan shared a photo on the last day of the shoot, showing off his ripped physique as he posed in front of a mirror. In the caption, he wrote, “Last day. Filming our last key scenes on Bhediya in the next 24 hrs. Since we are not allowed to put out any stills from the film this was the last time I starred in the mirror and kinda had to say it’s time to say goodbye to my long hair, beard and the changes my director Amar Kaushik has made me make for this character. Although something tells me this is not the end but a new beginning.”

The film marks Varun Dhawan and Kriti Sanon’s second collaboration as co-stars after their appearance in Dilwale. Bhediya is directed by Amar Kaushik and is produced by Dinesh Vijan. The film will release on November 25, 2022.