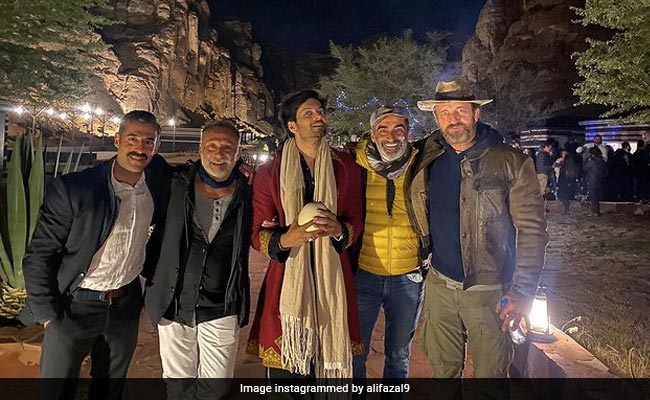 Ali Fazal is going from strength to strength. The actor, who made a splash recently with his poster from the film Death On The Nile, is not slowing down anytime soon. We say this because the actor has now shared images of himself along with the cast of his next Hollywood venture Kandahar, which is being headlined by the amazing Gerard Butler. Ali Fazal shared a photo of himself having a gala time with some members of the cast and crew as the rest of them were still on the dance floor, the actor’s caption revealed. Also seen in the image are actors Bahador Foladi, Navid Negahban and Vassilis Koukalani. Sharing the image, Ali Fazal said, “This one is for LOVE. Christmas with the Kandahar gang.”

Ali Fazal further added in the caption, “Some here and some still on the dance floor…And am sorry I have no freakkn clue why I am holding an ostrich egg in my hand. Or is it?? (WELCOME TO JURASSIC PARK, T Afghan Rex )”

And, that’s not all. Ali Fazal then wrote, “I am sorry Gerry Butler, am just tagging you now…gonna shake things up at your Instagram station a little. Navid jan, you are all heart and I love you. That’s all. Bahador meet me soon. Vas, I got the reservation!” tagging the actors.

Responding to the images, Ali Fazal’s girlfriend, Richa Chadha wrote, “OMG I miss you all so much. Sending VN for Gerry.” Casting director Shanoo Sharma said, “Tell Gerard I said hi… and give him a kiss from me will you?”

According to a report by Variety, Kandahar is an action thriller directed by Ric Roman Waugh. The screenplay has been written by Waugh along with former military intelligence officer Mitchell LaFortune. It is based on LaFortune’s experiences at the Defense Intelligence Agency in Afghanistan at the time of the Snowden leaks.

As the lead, Gerard Butler will star as Tom Harris, an undercover CIA operative who finds himself in hostile territory with enemies closing in.

Meanwhile, Ali Fazal is still basking in all the praise coming his way for this suave look in the poster of Death On The Nile. The film is based on Dame Agatha Christie’s eponymous novel. The role of Christie’s famed and eccentric Belgian detective Hercule Poirot will be played by Kenneth Branagh, who is also the director of the film.  Also in the film is Gal Gadot as Linnet Doyle, an heiress who has been described as “The Bride” in the poster.

Ali Fazal, meanwhile, holds the title of “The Cousin”. In the caption, Ali Fazal wrote, “One month to go! All aboard the Karnak. Here’s a glimpse of who you will meet. All aboard! In one month, Death On The Nile arrives exclusively in theatres February.”

Previously, Ali Fazal has been part of international projects such as Victoria And Abdul with Dame Judi Dench and Furious 7.