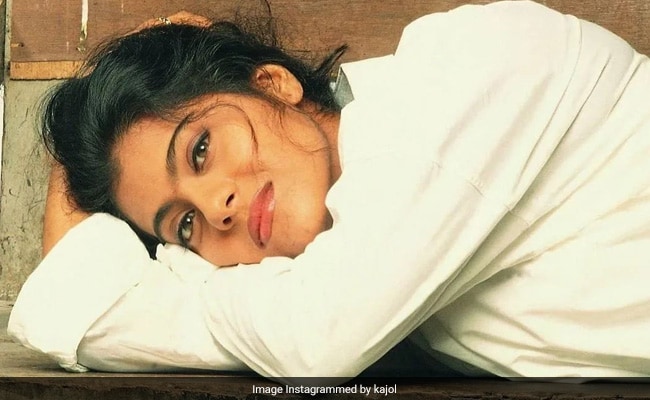 There is a reason the country has been madly in love with Kajol for decades now. The actress’s impeccable screen presence aside, she is also loved for her candid candour. And, we get to see a glimpse of her wit and charm on social media. Kajol often shares funny and, might we add, stunning pictures of herself on Instagram and this includes a collection of amazing throwback images. On Thursday, she shared yet another vintage picture of herself lounging around in a crisp white shirt and her hair tied in a messy bun. In the caption, Kajol wrote, “Doing something constructive eventually pays off…Laziness pays off now.”

Kajol’s fans are no strangers to the joy of throwback posts thanks to the actress. A few days ago, the actress celebrated 24 years of her film Ishq, in which she starred with her husband Ajay Devgn as well as Aamir Khan and Juhi Chawla. Sharing a video montage of moments from the film, Kajol wrote, “All is fair in love, war, and 90s movies,” with the hashtag, “24 Years Of Ishq.”

That’s not all. When Ajay Devgn celebrated his 30th year in the movies in November last year, Kajol wished the superstar with the cutest throwback image of the two sharing a hug. In the caption, Kajol wrote, “Completing 30 years, 3 decades and god knows how many countless hours before that in cinema Ajay Devgn. With the same quiet steady dedication and just letting his work speak for him and what he thinks about the film industry. Respect always. Keep on rocking!” The doting wife also added the hashtags, “He the man” and “so proud of you”.

And, in response, Ajay Devgn had the nicest words for his wife. He wrote, “Thank you for being my constant,” with a heart emoji.

Kajol was last seen in the Netflix film Tribhanga. She will be seen soon in The Last Hurrah, a family drama by actress-director Revathi.