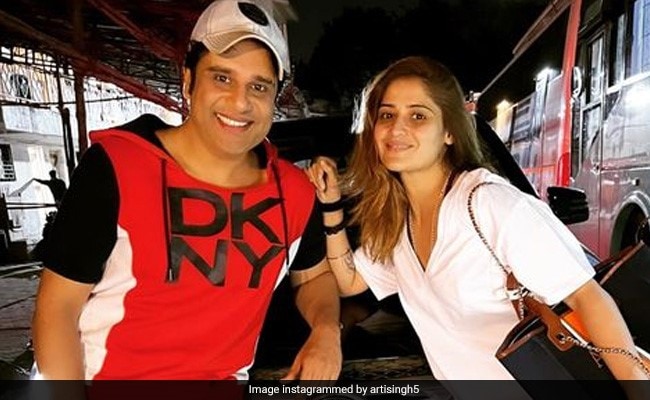 Krushna Abhishek and Arti Singh are sibling goals! They are often seen praising one another on social media platforms, media interactions, and interviews. And whenever one buys something, the other expresses happiness. Recently, The Kapil Sharma Show actor bought a new Mercedes and Arti Singh shared the happy news. She shared photos with the new car and Krushna and penned a sweet note for her brother. In her note, Arti expressed that she is “so so proud” and also called herself a “proud sister”. In the photos, Arti Singh and Krushna Abhishek are all smiles. The model of Krushna’s new Mercedes is not known and he has purchased the swanky car in black colour.

Sharing the happy photos, Arti wrote, “So so proud of you. Well I hv never been into cars but this was my dream car. I can’t afford it right now but u bought it and made my dream come true .. and u deserve every bit coz u work so so hard .. proud sister @krushna30 Bag by @houseofkeisho.”

Last year, Arti Singh also bought a car and Krushna Abhishek had congratulated her with a sweet note. In his note, Krushna had shared that Arti worked hard and bought the car with her own money and didn’t take “a single penny” from him.

Krushna Abhishek had written, “Congo arti for her new car. can’t tell u how happy I am as u hv worked hard and on ur own without taking a single penny from me u bought it its really a proud feeling for a brother God bless u. be the way u r self made @artisingh5 @kashmera1 @raginikhanna @vinayanand786 @ahuja_yashvardhan chalo ab apni bhi ek aur car ho gayi. actually am only gonna take it on shoots.”

On the professional front, Krushna Abhishek is an integral part of The Kapil Sharma Show. He is seen on the show with Kapil Sharma, Bharti Singh, Chandan Prabhakar, Sudesh Lehri, and Archana Puran Singh.