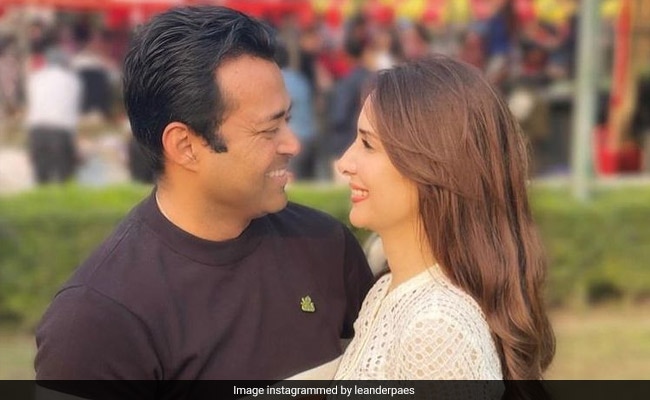 Love is in the air. And, this Friday, it is all over Leander Paes’ Instagram timeline. On the occasion of his girlfriend Kim Sharma’s birthday, the tennis legend shared a bunch of photos with her and penned a sweet note on the photo-sharing platform. In the images, the couple only has eyes for each other. In one photo, the Mohabbatein star is seen smiling for the camera, looking lovely as always. Sharing the photos, Leander Paes wrote, “Happy Birthday my darling, Kim Sharma. My wish for you is a year as magical as you.” Several fans of the couple also replied to the post and wished the actress.

Both Leander Paes and Kim Sharma do not shy away from sharing pictures and videos of each other on social media. On the occasion of Christmas, Leander Paes shared a photo with Kim Sharma in front of a Christmas tree and wrote, “Merry Christmas. Love, peace and joy to everyone .”

On Diwali too, the couple posed with their pet dog for a photo. In the caption, Leander Paes wrote, “Happy Diwali from us to all of you! May your year be full of light, happiness and prosperity. God Bless.”

Last year, Kim Sharma shared a loved up picture of the couple. She let the photo do all the talking with just an evil-eye amulet and a couple emoji in the caption.

Kim Sharma also shared an image of the couple with Olympic gold medalist, Neeraj Chopra. The caption said, “In the very august company of Neeraj Chopra.  Thank you for the pride you’ve brought to our country. And Leander Paes for starting it all up,” with the hashtags “1996” and “OG”.