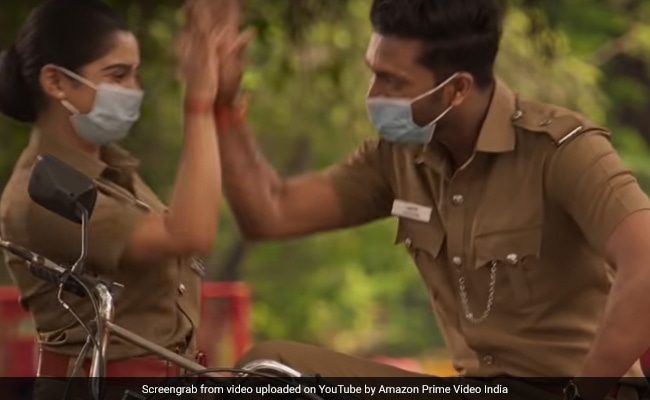 Rating: Three stars (out of 5)

A follow-up to Amazon Prime Video’s 2020 lockdown anthology Putham Pudhu Kaalai, this quintet of Tamil short films captures a range of moods and emotions while collectively focusing on individuals navigating communication breakdowns, bereavement and other crises during the lockdown necessitated by the second Covid-19 wave. “We are not attention seekers, we are connection seekers,” says a character in one of the five segments of Putham Pudhu Kaalai Vidiyaadhaa (Waiting for a Brand New Dawn). The statement provides a context for the despair of drifting souls as they struggle to tide over the toll that loss, grief, guilt and/or an inability to express themselves takes in the time of a pandemic.

Significantly, every story here ends on a hopeful note and, as the title suggests, points to the light at the end of the tunnel. Disease, death and desolation hang over the characters, but one of the segments finds space for dance, another for the mellifluousness of a classical raga played on a flute, and two others for the companionship of a dog as an antidote for despondence.

The first lockdown anthology, helmed by established directors, dealt with miracles and second chances. These five films, simple tales crafted with empathy and imagination, are the handiwork of younger Tamil filmmakers. The stories allude tangentially to the devastation inflicted by the pandemic in 2021 – shortage of medical oxygen, the rush for hospital beds, lonely deaths and hurried funerals.

Notwithstanding the sanitised feel, Putham Pudhu Kaalai Vidiyaadhaa has characters who trials and tribulations are easy to be invested in.

A certain degree of anthology fatigue is inevitable, but the acting and uncluttered storytelling combine to ensure that these films – each about 30 minutes long – add up to a moderately engaging composite portrait of people buffeted by distress and dread.

Mugakavasa Mutham (Kiss Over the Mask), written, directed and edited by Balaji Mohan, centres on two young police constables, Kuyili and Murugan, whose suppressed ardour for each other manifests itself in a daring, altruistic rescue mission in the middle of a strictly enforced lockdown that has brought the city to a standstill.

This story, lensed by A. Vasanth (the most experienced of the cinematographers assembled here) is about cops who have been deployed to keep people off the streets of Chennai and enforce strict Covid-19 protocols, but the dominant mood is light, cheerful and romantic. The suggestion is that no matter how daunting an obstacle is, life must go on.

The two constables guard a checkpoint. One of them is sent three streets away the next day and the other is obviously upset. And then, a young man fetches up on a two-wheeler and pleads with the cops to let him pass. He deserves an exemption, he says, because there is trouble brewing in his life and he has got to do something about it.

Mugakavasu Mutham, lively and heart-warming, plays out amid shared home food, friendly banter, dance moves and an impending wedding. The segment is enlivened by easy-flowing performances from Gouri G. Kishan and TeeJay Arunasalam as the two cops whose inhibitions are like the surgical masks on their faces – they conceal their emotions.

In Loners, an evocative short written and directed by Halitha Shameen and lit and filmed brilliantly by Raghav Adhithya, the tone turns markedly ruminative. Arjun Das and Lijimol Jose play Dheeran and Nalla, two strangers impacted profoundly by heartbreak and loneliness, direct consequences of the pandemic. Chance online encounters draw them towards each other’s orbits.

Nalla is an event manager and photographer who has lost work opportunities and a failed relationship to reckon with. Dheeran is an IT professional hit by a personal tragedy. Emotional turmoil unites the two as they seek to forge a connection that can serve as a salve. The two lead actors are consistently on the money. Arjun Das utilises his gravelly baritone to great effect and Lijimol Jose conveys both vulnerability and resilience without minimum effort.

Mouname Paarvayaai, too, benefits from a pair of instantly affecting performances. Directed and co-written by Madhumita, the two-hander has Joju George and Nadiya Moidu as a couple in a festering marriage in which all communication seems to have broken down. There is utter silence between the two – the segment has no dialogue – even when the deadly virus hits home.

They live under the same roof but the man and his wife do not speak to each other and go about their daily chores like automatons programmed to perform assigned gender roles. In the light of all that apparently separates the couple, the story examines the yawning gap between how things are in unhappy times and what they ought to be. It portrays the inner worlds of the two characters though sounds, gestures and visual compositions (cinematographer: Preetha Jayaraman) that alternate between the precise and the ambiguous. The two actors, working with non-verbal means, are in perfect sync with the understated design of the film.

Mask, directed by Surya Krishna, tells the story of techie Arjun (Sananth), who is looking for a house in the big city. His is no ordinary search – it entails making a clean breast of who he is, a move that he baulks at. His conservative father stands in his way. Under mounting emotional and mental duress, Arjun reconnects with an old school mate Velu (played by action choreographer Dhilip Subbarayan) who, too, has secrets to keep from his doting son. Their metaphorical masks must drop for the two men to be able to come to terms with their own selves and to break free from prisons of their own making.

To begin with, this story isn’t ostensibly rooted in circumstances flowing by the lockdown. But as it unfolds, death stealthily impinges upon it and serves to underscore the point that the virus is a great reveller and does not respect political power, manpower and wealth. The realisation sparks in Arjun a spirit of assertion and defiance.

Nizhal Tharum Idham (Comforting Shadows), directed and co-scripted by Richard Anthony, alternates between the interiors of the female protagonist Shobi’s (Aishwarya Lekshmi) mind and the external world represented by a departed parent who she, preoccupied with her work, had little time to communicate with.

Filmed by Vikas Vasudevan on deserted lanes in Pondicherry, and inside the heroine’s childhood home and in other spaces, this is a gentle exploration of memories recollected in solitude. The loneliness that engulfs Shobi amid the quest for solace drives her to search for new connections and cling to old ones. Can she shrug off the past, reconcile herself with the loss of a dear one and move on? The voices in her head and the shadows dancing around her hold the answers.

Putham Pudhu Kaalai Vidiyaadhaa paints five portraits of solitude and resilience and provide flashes of as many fresh, felicitous Tamil cinema voices whose promise is unmistakable.