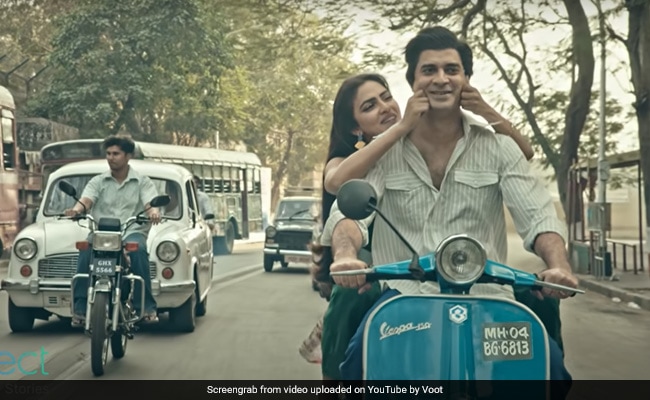 After several big screen iterations of the story of Mahesh Bhatt’s life and loves, it is now the turn of an eight-part web series to revisit the producer-director-writer’s early years as a struggling filmmaker grappling with the fallout of an extra-marital affair and his vexed equations with the industry. The result is desultory.

Ranjish Hi Sahi, created by Bhatt himself and streaming on Voot Select, dips into personal lore to exhume the ghost of a successful but troubled actress who had to battle paranoid schizophrenia. The story of a creative and conflicted man jousting with ethical questions and labouring to be just to the women in his life might have seemed necessary if only it had not been done to death already. The fact that it is stretched out across several episodes only enhances its inessentiality.

The series is written and directed by Pushpdeep Bhardwaj, who helmed Jalebi (2018), a Hindi remake of a Bengali film (Praktan) that the Bhatts, Mahesh and Mukesh. It is difficult to pinpoint what he could have done to liven things up and lend relevance to this elongated, fictionalised version of the oft-told Parveen Babi saga.

The male protagonist of Ranjish Hi Sahi, set in the 1970s, is torn between a wife he has wronged and a larger-than-life woman who desperately needs him by her side. “I trust you,” his wife says when he admits that he spent an entire night with the actress. She asks no question. Contrasted with this too-good-to-be-true serenity is manic passion.

The actress asks the filmmaker who she cannot do without: “Everybody wants a piece of me. Why don’t you want me?” That is the shade of love that Ranjish Hi Sahi focuses while touching upon other strands of the drama.

Tahir Raj Bhasin, fresh from playing Sunil Gavaskar on the big screen and on a hot professional streak (he has another web series out this week and a movie due for release early next month), plays the lead with a keen sense of the moral cleft-stick that is at play here.

Ranjish Hi Sahi is Amala Paul’s show more than anybody else’s. She plays lynchpin without being weighed down one bit by the onerous burden. Paul frequently pulls the narrative out of its sluggish troughs, moving back and forth between the euphoric and the edgy, the seductive and the sad in the blink of an eye.

The series makes liberal use of fictional elements to piece together an account that swings between tedious trudge and illuminating insight. Sadly, there simply isn’t enough of the latter to fully offset the deleteriously dull patches in this long-form retelling of a story that is crying out to be laid to rest.

The title, borrowed from an Ahmed Faraz ghazal immortalised by Mehdi Hassan, sums up the state of a married man who does not want to end up like his father – a Hindu film producer who had a child out of wedlock with a Muslim woman but never gathered the courage to publicly acknowledge the fact.

As he dangles precariously between his vows to his wife and his sense of gratitude to the other woman, Ranjish Hi Sahi constructs a mish-mash of a narrative: a little of Arth (told from the wife’s perspective), some bits of Phir Teri Kahani Yaad Aayee (a weak melodrama, neither here nor there), snatches from Woh Lamhe (the self-same tale seen from the actress’ point of view) and parts of Zakhm (devoted in large parts to the hero’s mother).

Shankar Vats (Bhasin), with three resounding flops behind him, is in the process of making his fourth film, his last shot at a foothold in the industry. An extremely popular actress Amna Parvez (Paul), who has a huge fan following, takes a shine to the young writer-director desperately looking for genuine inspiration.

The show pans out in two time-frames – the 1970s and 2005, the year of Babi’s death. There is, in addition, a brief passage that goes all the way back to 1959 to bring out an important aspect of the male protagonist’s relationship with his mother.

The recreation of 1970s Bollywood and the smarmy ways of the men who controlled the industry is competent. Many of the characters that Shankar Vats and Aman Parvez have to deal with in order to keep going in the face of serious hindrances have real-life parallels. As the story unfolds, spotting the connections becomes a part of the game. Not that it matters. The triangle is what Ranjish Hi Sahi hinges on – everything else in the show is of secondary importance, barring Shankar’s mother (Zarina Wahab).

The back story of Shankar’s wife, Anju (Amrita Puri), a girl liberated from an orphanage by Shankar, is laid out with a fair bit of detailing in order establish why the lady is so determined to build a happy, financially secure home for herself and her daughter. The character is eclipsed in the overall scheme of the web series. Puri, however, seizes every opportunity the role offers to present a clear delineation of a woman fighting to protect her happiness and dignity. As Shankar’s family unravels as the Amna decides to go for broke, his mother is a helpless spectator acutely aware, from lived experience, of the turbulence that lies ahead. Zarina Wahab is absolutely terrific in the role of a woman who does not stop reminding her son that he cannot let history repeat itself.

A crucial part of Ranjish Hi Sahi is indeed devoted to Shankar’s unquestioning filial fealty to his mother and his younger brother Ganesh (Paras Priyadarshan), who is a constant source of support as the aspiring filmmaker negotiates with powerful elements in the industry who have no patience for his aggression and will do anything in their power to see him fail.

Ranjish Hi Sahi is the story of a man, a son, a husband, a father and a lover whose choices threaten to derail his life and career. Not a bad deal on paper. But with nothing new to offer, the series merely sputters along without exploding into anything that could be deemed strikingly revelatory.