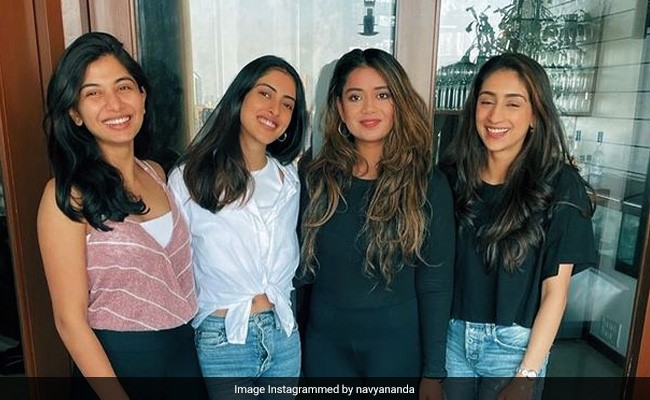 Navya Naveli Nanda has her own fanbase on social media. From talking about her projects to sharing throwback photos with her family members, Navya has shared some unmissable posts on social media platforms. She also loved to spend time with her friends and recently, she shared a photo with her girlfriends. In the photo, Navya is posing with three of her girlfriends. She is dressed in a white knotted shirt, blue denim and completed the look with hoops. She left her hair open and smiled for the camera. Navya Naveli also shared a similar photo on her Instagram Stories with a yellow heart emoji.

Sharing the photo, Navya Naveli Nanda wrote, “This is us!!!” followed by a star emoji. Navya Naveli’s mother Shweta Bachchan Nanda left a sweet compliment for her daughter and her friends in the comment section. Shweta wrote, “Best,” followed by an array of black heart emojis. Naina Bachchan called them “Fab 4.”

Check out Navya Naveli Nanda’s latest photo with her friends:

Looking at Navya Naveli Nanda’s social media game, many thought that she will also join the showbiz world. But, she has different plans. Navya Naveli Nanda graduated from New York’s Fordham University in 2020. Post which, she co-founded Aara Health and also started her NGO project with the name Project Naveli.

Just like her father, Nikhil Nanda, Navya Naveli wants to be in the field of business.