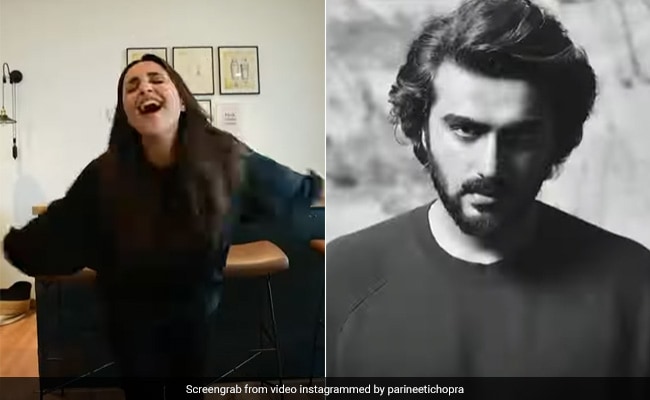 Stills from the video. (courtesy: parineetichopra)

OK, so if your friends are not sending you free clothes? What are they doing? Thanks to Arjun Kapoor for setting such high standards of friendship. Alright, here’s a little context. A few weeks ago, Arjun Kapoor posted a picture of himself in a black sweatshirt and Parineeti Chopra just wanted it. “Photoshoot done. Now send me this sweatshirt,” she commented. Guess what? She did get it. The actress decided to share the entire story of leaving a comment on Arjun Kapoor’s post, to trying out the hoodie and dancing away. At the end of the video, the actress wrote: “Who wore it better. PS_ its me.” Sorry, Parineeti Chopra but in this case we will have to call it even.

Sharing the video, the actress wrote: “That frustrating feeling when he annoys me and then does nice things. OK but I’m seriously touched that you sent me your sweatshirt when you saw that I loved it… Now we will have to remain friends because we share clothes. Oh no. (Annoying human being. Love you too).”

Arjun Kapoor, who often trolls the actress, commented on her video: “It looks better on you. BTW free hai yeh kisne bola? Ma’am Pls send the payment I’m sending you the link.” Oops! Spoke too soon.

Arjun Kapoor and Parineeti Chopra have worked together in films like in Ishaqzaade, Namaste England and Sandeep Aur Pinky Faraar.

Parineetii was seen in The Girl On The Train, streaming on Netflix. It is a Bollywood remake of the English version that starred Emily Blunt in the lead role. The Hollywood film was an adaptation of Paula Hawkins’ 2015 bestseller of the same name. She also starred in the Saina Nehwal biopic and Sandeep Aur Pinky Faraar last year.

In terms of work, Arjun Kapoor was seen in the horror comedy Bhoot Police with Saif Ali Khan, Jacqueline Fernandez and Yami Gautam. Last year, the actor starred in Sandeep Aur Pinky Faraar, in which he shared screen space with Parineeti Chopra. He also featured in Sardar Ka Grandson. He will next be seen in Ek Villain with Disha Patani, Tara Sutaria and John Abraham. He will also star in The Lady Killer with Bhumi Pednekar.