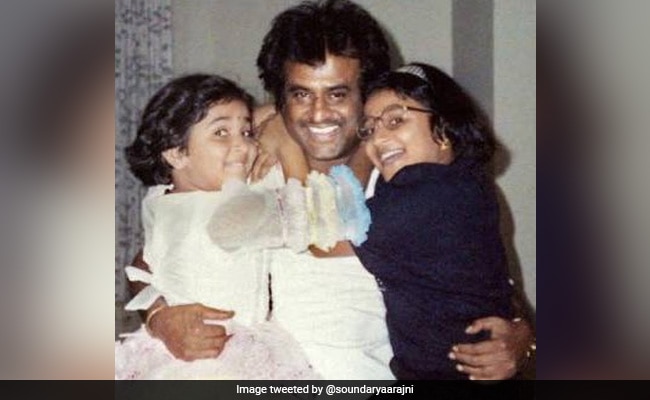 Soundarya Rajinikanth, on Monday night, updated her Twitter profile picture. She changed it to a precious throwback from her and sister Aishwaryaa’s childhood days. The picture also features their superstar father Rajinikanth. No caption needed. Soundarya changed her profile picture soon after her sister Aishwaryaa announced her separation with actor-filmmaker Dhanush. The couple, married for 18 years, announced their separation in a joint statement. They got married in 2004 and are parents to two sons.

This is the picture that Aishwaryaa Rajinikanth shared:

Soundarya Rajinikanth married Vishagan Vanangamudi in February, 2019. Soundarya has worked as a graphic designer in the South film industry since 1999, has also directed films such as Kochadaiiyaan and Velaiilla Pattadhari 2. She was previously married to R Ashwin, with whom she has a 6-year-old son named Ved.

Rajinikanth married Latha on February 26, 1981. Rajinikanth debuted in the film industry in 1975 with Apoorva Raagangal. He has starred in over 160 films, most of which are in Tamil. Rajinikanth was honoured with the Padma Bhushan in 2000 and the Padma Vibhushan in 2016. In 2021, he received the Dadasaheb Phalke Award for his contribution to Indian cinema.