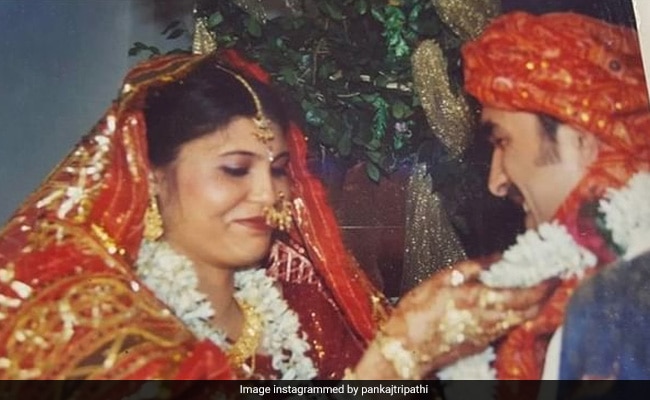 Pankaj Tripathi has the Internet smiling and for good reason. The performer, who is known for his versatility and range as an actor, celebrated his 17th wedding anniversary with a very special post. The actor marked the occasion by sharing a bunch of vintage throwback pictures in which he is seen with his wife, Mridula. While the picture series begins with Pankaj Tripathi and his wife as a young couple, they are also followed by images of Mridula as a stunning bride. The series also includes more recent images of the couple sharing a laugh.

In the caption, Pankaj Tripathi wrote, “Satrah saal hue aaj parinay sootr mein. Is sukhad yaatra ki kuchh yaaden. Dhanyavaad (It has been 17 years since we were bound in holy matrimony. A few glimpses of this happy journey. Thank you).”

Replying to the post, actress Rasika Dugal said, “Lots of love Pankaj and Mridula.” “You two are the sweetest. Had to say this even though I know it’s Ahmed that side,” referring to a member of Pankaj Tripathi’s team. Director Anurag Kashyap said, “Waah badhai.”

A few days ago, Pankaj Tripathi and his wife Mridula were seen posing for a happy picture with Prithvi Raj Man Singh, the former cricket player and administrator. Pankaj Tripathi portrayed Prithvi Raj Man Singh in 83, a film based on team India’s win at the 1983 World Cup. Sharing the post, the actor wrote, “PR Man Singh aur unke dharmapatni ke saath mein aur meri patni Mridula, 83 ke premier mei (My wife Mridula and I with PR Man Singh and his wife at the premiere of 83).”

On the occasion of Diwali too last year, the couple posed together for a bunch of happy pictures and wrote, “Happy Diwali to everyone.”

And, we just cannot get over how adorable the couple looks in the pictures that Pankaj Tripathi shared soon after he returned from his village last year. In the images, the two are seen staring at the green fields, with their arms around each other. In another, the couple is seen sharing a hug, smiling for the camera.  In the caption, he wrote, “Pichhale dino gaon ho ke aaya hoon, thoda sa gaon bhi saath laaya hoon (I returned from the village recently, and brought a little bit of it along with me).”