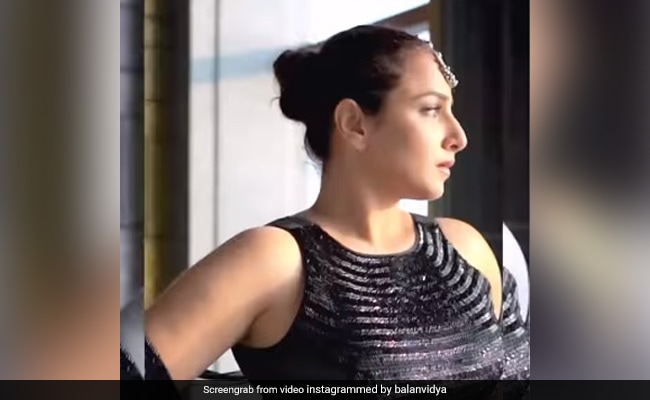 Covid or no covid, Bollywood has been bustling with celebrity weddings. Though the ceremonies got downscaled due to pandemic restrictions and turned into intimate gatherings with the least media coverage, these events still managed to steal the spotlight. But there are some celebrities who chose to stay safe in their homes. Abiding by the restrictions and being engaged in tight schedules, Vidya Balan had to ditch a row of “weddings and baarats” this season. And, she is definitely missing them now. Vidya Balan has revealed it in her latest Instagram post. The actress has shared a video where she is dressing up in a black designer ensemble. As she spins a magical tale through her outfit, the caption is more true to her thoughts. Vidya Balan wrote, “Missing all the weddings and baarats I did not attend.” We can relate to Vidya, can’t we?

Vidya Balan’s ethnic lehenga outfit may have given her some moments of FOMO. But the actress hasn’t been gloomy at all. Instead, she has been all smiles because of her shoot schedules for her next film. The yet-to-be-titled project just wrapped up its shooting in Ooty. Vidya Balan announced the news on Instagram by posting a photo with co-star Pratik Gandhi. The movie also features Ileana D’Cruz and Sendhil Ramamurthy. Vidya Balan wrote, “And, just like that, a wonderful winter spell in Ooty comes to an end. As we wrap the shoot of our untitled romantic comedy-drama, we will cherish these memories for life. Missed Sendhil and Ileana.”

Vidya Balan often shares sneak peeks from her shoot life. And, coffee is an integral part of her shooting schedules. She posed with her favourite drink on International Coffee Day.  Vidya Balan captioned it, “Shoot. Coffee. Shoot. Coffee. How was your week? Batao na [Tell me].”

Another time, Vidya Balan posted photos from her shoot and added a humorous caption to it. She wrote, “When you are done shooting, but your team wants a few more shots.”