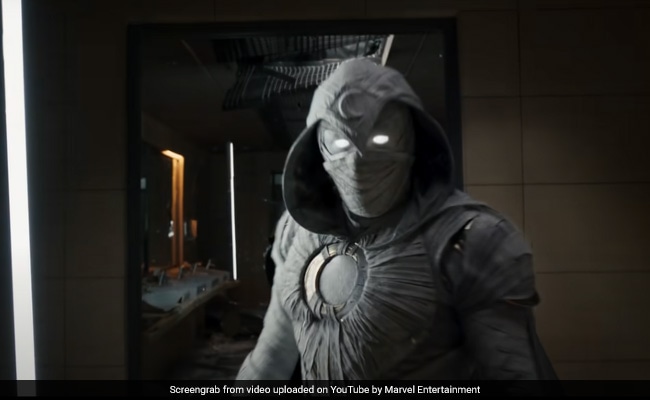 Marvel Studio has dropped the first trailer for its new series Moon Knight and we just can’t keep quiet. No kidding. The trailer, which was released today, broke the Internet by introducing Marvel’s new mysterious superhero. Oh, yes. You read that right. A new superhero. The trailer pulls us into it when we hear, “Hello and welcome to Staying Awake.” We see Oscar Isaac, playing the protagonist, in the middle of a mind-boggling double-reality. In the trailer, Steven Grant (Oscar Isaac) “can’t tell the difference between waking life and dreams.” And, we see him living a confusing, double life of Steven and Marc Spector, a mercenary. As we dive in and out of the protagonist’s jarred state of mind, we feel the intensity of the much-awaited movie. We also sense the touch of a dark psychological thriller in this trailer.

According to a note shared by the makers on Twitter, “Struggling with multiple personalities and amoral inclinations, Marc Spector fights on against all odds as the cloaked avenger Moon Knight.”

Struggling with multiple personalities and amoral inclinations, Marc Spector fights on against all odds as the cloaked avenger Moon Knight. This week on #Marvel101, get ready to take on the night! pic.twitter.com/YVomLgN4oZ

The trailer depicts such shades in Marc/Steven’s character. We see Steven/Marc confused about his identity as he gets called by different names by different people, in person or on call. We see signs of mental instability as the protagonist ties himself to the footboard of his bed, sees monsters in people and faces difficulties to find his way through the world.

Ethan Hawke gave us a glimpse of his character, whose name remains undisclosed as of now. Playing a villain’s role, he is found telling Marc/Steven, “Embrace the chaos.”

Thereafter, we see the disturbed protagonist turning into a violent Moon Knight, armoured in a grave-looking attire.

A blurb in the IMDB description of this new series reads, “A former U.S. marine, struggling with dissociative identity disorder, is granted the powers of an Egyptian moon god. But he soon finds out that these newfound powers can be both a blessing and a curse to his troubled life.”

Moon Knight is co-directed by Mohamed Diab and filmmakers Justin Benson and Aaron Moorhead. George Clooney co-directed one of its six episodes.