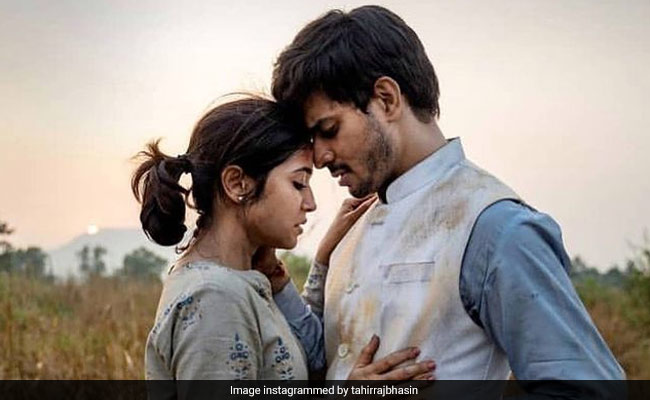 The anti-hero persona that catapulted Shahrukh Khan into the Bollywood stratosphere in the early 1990s gets a female clone almost 30 years on in the new Netflix series Yeh Kaali Kaali Ankhein. She is, however, no patch on the original because there is none of the throbbing energy of Baazigar and Darr in this erratic and effete thriller.

Scripted and directed by Siddharth Sengupta, Yeh Kaali Kaali Ankhein, effects another major reversal and turns the hunted into the hunter in a tale of obsessive love in which the gender dynamic is inverted to give the woman who won’t take no for an answer the upper hand.

The title of the series, as the whole wide world knows, is a line from a Baazigar song, but there is no room for intense, infectious romance in Yeh Kaali Kaali Ankhein, in which Tahir Raj Bhasin (in his second web series of the week) plays a feckless engineering graduate whose life goes into a tailspin as a powerful politician’s daughter forces him into marriage.

Vikrant Chauhan, the male protagonist and the narrator of his story, tries very hard to dodge the unwanted attention of the unbudging Purva Awasthi (Anchal Singh), who has had her eyes on him since he was a schoolboy in kickers.

The prelude having set the stage for what is to come, the girl returns to the small town they inhabit “five years, eight months and seven days” after Vikrant spurned her offer of friendship and she vanished from his life. Absence has made her heart grow fonder and her fervour has turned more intense. Vikrant’s fate is sealed.

It takes him no time to figure out that he is trapped. Purva’s father is the local political strongman Akheraj Awasthi ‘Vidrohi’ (Saurabh Shukla) and the employer of Vikrant’s accountant-father. Wriggling out is not an option, as the young man learns to his and his family’s consternation when he ticks Purva off and tells her he is not interested in being friends with her.

Do not take on the might of Akheraj’s goons, Vikrant’s boyhood pal Golden (Anantvijay Joshi) warns him. That wouldn’t be stupidity; it would be suicide, he says. Vikrant loves his college mate Shikha (Shweta Tripathi Sharma) and intends to marry her once he lands a job. But now that Purva breathes down his neck, a cloud hangs over his relationship with Shikha.

With his back to wall, Vikrant draws up an elaborate and dangerous retaliation plan, turning himself from a meek, unassuming young man into a devious schemer willing to push his luck. However, he learns the hard way that compulsion and hate aren’t enough to pull the trigger. One also needs to be inhuman to be able to kill.

Vikrant isn’t a natural born killer. Therefore, in order to mimic his tormenters, he has turn to the Dark Web and videos on the Internet to arm himself with the wherewithal to fight them off and prevent Purva from preempting his plans. He sinks deeper and deeper into a cesspool in the process. At one point, his best friend reprimands him for becoming like the very people that he hates the most. But once Vikrant takes the plunge, there is no turning back.

If that sounds like Yeh Kaali Kaali Ankhein has got all the ingredients a dynamic, exciting thriller requires in order to fly, nothing could be further from the truth. Purva’s passion, Shikha’s vulnerability and Vikrant’s desperate measures do not exactly come together to deliver a humdinger. Monotony creeps into the show pretty quickly and then refuses to go away.

Neither the vile acts of Akheraj – Saurabh Shukla’s performance is characteristically competent but the seasoned actor seems, for once, to be repeating things he has done before on screen and with greater aplomb – nor the cussedly cruel ways of his pampered daughter exude the kind of menace that could make Vikrant’s daring counter-punches look like an absolutely inevitable reaction to intimations of danger.

The politician has a bloodthirsty adoptive son, Dharmesh (played by Surya Sharma, who had a similar role in Siddharth Sengupta’s previous web series Undekhi). He unleashes a band of toughs and unbridled mayhem as Vikrant decides to take matters into his own hands. Late in the series, a taciturn sniper (Arunoday Singh) joins the melee. He seeks to add firepower to the plot but to no avail. When Vikrant agrees to marry Purva, the latter peremptorily says: Time pe pahunchna warna tumko uthwa lenge (get there on time or I’ll have you kidnapped). Nothing unusual in there given the position of power that the girl enjoys. The fact that it isn’t a man who is holding out the threat gives the line an unfamiliar ring.

In another scene, Purva’s father, whose brutality the hero is witness to early in the series, puts Vikrant’s predicament into words: “Tum Purva ki trophy ho. Jeetegi toh wohi (You’re my daughter’s trophy. She will win come what may).”

Set in a fictitious Uttar Pradesh town called Onkara, Yeh Kaali Kaali Ankhein is about a man who wants to flee from the confines of his sleepy birthplace but finds himself hemmed in because his own father, beholden to his master for favours extended to his family in the past, insists that the boy must not lose the golden opportunity being offered to him on a platter. Against his own counsel, Vikrant is compelled to abandon his dream and the girl he loves.

Can any series set in the boondocks of India’s largest state do without political goons and continuous talk of elections? Yeh Kaali Kaali Ankhein definitely cannot. Musclemen are on the rampage and sundry people are in their line of fire. It is also election time – Akheraj has collected massive funds for the purpose and Vikrant’s father has the key to the warehouse – but the show does not actually have scenes of poll rallies and crowds hailing their leader.

“I bloody invested my life in you,” Purva thunders in one scene. But she goes on to qualify her state of mind thus: “I’m not crazy. I’m just possessive.” The fanatical fixation with an object of desire – which would have imparted to her hounding of the hero added psychological urgency – is indeed missing from the character’s mental make-up and the dangerous liaison that she forges. And that is where it all goes wrong.

Yeh Kaali Kaali Ankhein is simply not deep or dark enough to give the actors the scope to hit the high notes. Not that the performances are below-par. It is the show that is a letdown.